I offer 1-1 lessons, groups lessons, as well as Masterclasses for both choirs and solo singers of all styles.

Bring any style of repertoire you choose! Lessons typically focus on the muscular coordination of your voice, so no pianist is needed. However, if you have an audition/exam/competition coming up and want to run your music with piano, let me know and we can arrange something ahead of time! Please read my Studio Policy if you are a first time student.

*All lessons are Online except by special request for In-person.
*Know someone who has been told they are "tone-deaf" by others? Send them to me!
Sign-up for lessons!
Please make payment after your lesson.
*Payments in Singapore can be made in cash, or online through DBS PayLah! or Paypal.
*Payments internationally can be arranged through Paypal and Venmo.

In light of Covid-19, In-person lessons come with some rules:
1) Participants should maintain at least 2 metres safe distance from others at all times.
2) You are allowed last minute cancellations if you are not feeling well.
3) Masks must continue to be worn as a default, unless when unmasking is necessary for the training activity. If possible, face shields should be worn even when unmasked.
4) Please let me know ahead of time, should you require special health related accommodations.

Henrie Lau - Musician (written 2019)
I was a piano performance major who fell in love with the world of sacred vocal music, of opera and of countertenor singing. I decided to sign up for a lesson with Mr Chan after hearing his performance with the Malaysia Bach Festival and thanks to that decision I had made, I have been blessed with many new possibilities and options in my musical life. Mr Chan has helped me dig up and develop my natural tenor range, the voice that is honest to my instrument and true to my DNA, instead of ‘emulating’ a technique or voice that might be ‘mainstream’ or widespread. I am able to find a level of ease, effortlessness and clarity in my voice that I cannot achieve anywhere else, as well as minimalism in my phonation process. Mr Chan helps me to notice problems that may be restricting me vocally such as unnecessary tension or habitual ‘holding’ patterns in my vocal mechanism and solve them through methodical experimentation and finding out what works well for me personally. I am always left with self-help tools to diagnose and troubleshoot problems I might encounter in my singing. Mr Chan’s understanding of the Feldenkrais philosophy and method also helps me to harness the power of my subconscious during lessons in developing my technique, as opposed to using counterintuitive strategies that cause unproductive tension and pain. By the end of every lesson, I can always breathe better and sing better. I have also learnt so much about the art of diction and focussing on the text from looking at German lieder, Italian arias and English art songs with Mr Chan, an aspect of singing that is easy for me to neglect – the enunciation of every word, every vowel, every consonant, and giving them proper dramatic emphasis and colour in order to deliver a personal and artistic interpretation of a work. From looking at and discussing treatises by past masters such as Lamperti and Garcia, as well as modern research on the voice and of acoustics, my understanding of the voice has also expanded, allowing me to make better technical decisions in my singing. Lessons with Mr Chan are both mechanically rewarding and intellectual fulfilling. His devotion to the art inspires me and he is always generous with his knowledge. With his knowledge of the voice and of music, I trust Mr Chan 100% with my vocal health and development.
Benjamin Low - Professional Singer & Music Educator (written 2019)
​If I had to describe Wei En as a pedagogue in one word, I would say, “Incisive”. In 12-13 years of singing, including A level music and an undergraduate degree, never have I had a teacher who was so laser-sharp in ‘diagnosing’ root issues and effective in ‘prescribing’ exercises to combat them. What makes Wei En even more special is his patience and humility, as he has taken time and incredible hard work himself to get where he is today, building trust easily with his students, which is incredibly important in singing.

Having studied voice for eight years before meeting with Wei En, I had developed a slew of vocal tension habits. Due to my perfect pitch and poor choral technique, I had developed a tension in my throat and at the back of my tongue that my teachers and I could not seem to deal with. During my first lesson with Wei En, he simply observed how I stood when I sang and, just by noticing certain parts of my body that tensed up and teaching me to relax them, made a huge difference in the way that I sounded and, more importantly, in the way that I felt. We then proceeded to work on various exercises that I found very difficult at first as they isolated my bad vocal habits but, as I practiced them over time, I began to feel the throat and tongue tension amazingly disappear. Even my teachers who heard me after a period of time were astonished. I also realised I had bad speaking and projection habits developed over my military stint, and certain misconceptions about physiology and breathing, that Wei En helped me through.

I always look forward to lessons with Wei En as I know it is going to make me a significantly better singer. I trust him and so I practice what he tells me too to incredible results. His pedagogy is centred on vocal health and releasing tension, and achieving the healthiest and most balanced ‘you’ sound. Something amazing is his knowledge of the nuances of vocal production and the way he explains it. You can hear how much he knows when he sings and you will learn a lot from him.
Raymond Lee - Professional Singer & Music Educator (written 2019)
​​很高興能有機會在Malaysia Bach Festival的時候遇到偉恩。他是一個很細膩，不吝嗇與我分享他所知道的，讓我更了解Bach style的一些潛規則，更注意在字裡行間裡如何詮釋/演繹德文-這個很多雙子音的語言。他非常的細心，更非常有耐心的聽我不斷的重複、不斷的嘗試，直到我完全掌握。

I've been unusually fortunate to have had wonderful teachers throughout my training. Teachers who are leading pedagogues in their fields. They taught me the ins-and-outs of being musical, being expressive, being sincere, being honest. They gave me a sound technique and a functional understanding of how the voice works. No bullshit, only scientifically researched methodology that appreciates the success of generations of singers before us. I even suspect, sometimes, that I like the process of learning and research more than performing itself! It brings me great joy when I share this knowledge, enabling others to forge ahead confidently in their paths once their time with me comes to an end. My goal is to make sure you learn and leave as an independently capable singer with everything I can offer.

I have spent the last decade teaching at a many different levels. I've given masterclasses at public schools, community choirs, and artistic organisations. I've taught workshop series at various organisations. I've been a General Music teacher to a classroom full of children for an entire semester. I've been invited as guest clinician to choirs. I've kept teaching private voice lessons over the years and I've worked with students completing advance graduate degrees at top voice programs. I've worked with my peers who are professional singers. I've worked with retirees who want to sing well at their wedding. I've worked with A LOT of "tone-deaf" individuals, teaching them that "tone-deafness" is a lie. And it's all been amazing.

I do not sing pop or jazz or MT professionally, but I am confident that building a flexible and reliable foundation of technique is crucial to any genre. After all, the abilities of our voices have to obey the mechanics of the anatomy.

I graduated with a Masters in Voice Performance from New England Conservatory, where I studied with renowned pedagogue Dr. Ian Howell. My training also includes a Bachelors in Voice Performance from Ithaca College, where I studied with Professor Carol McAmis. In Singapore, my early training was provided by acclaimed local conductor, Toh Ban Sheng.

If you are curious about my pedagogy or would like to know more about how lessons with me work, drop a message. 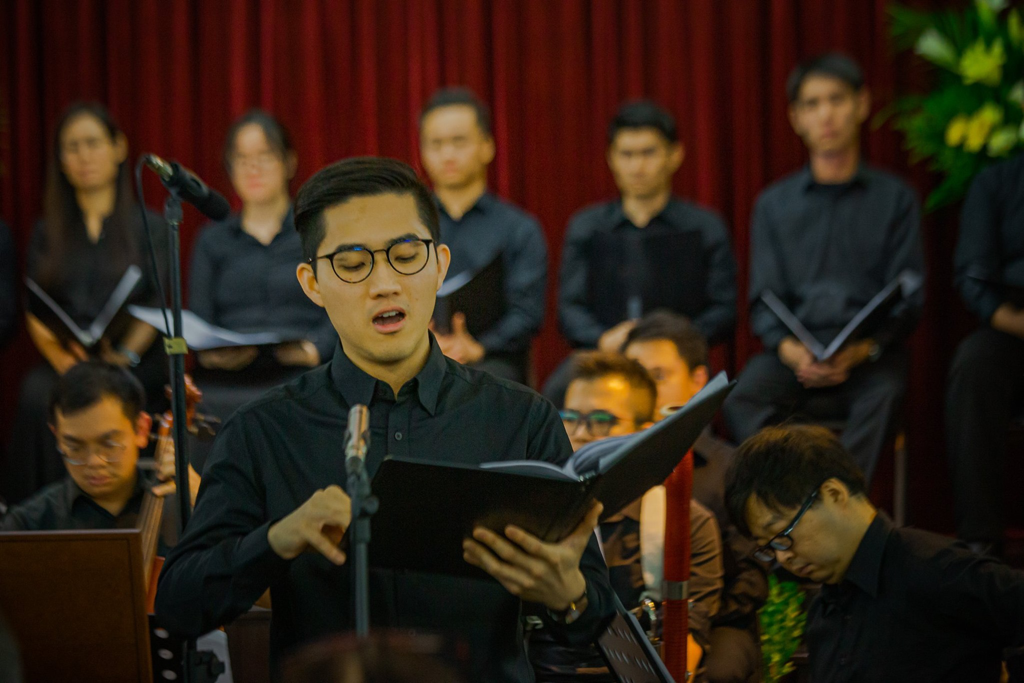